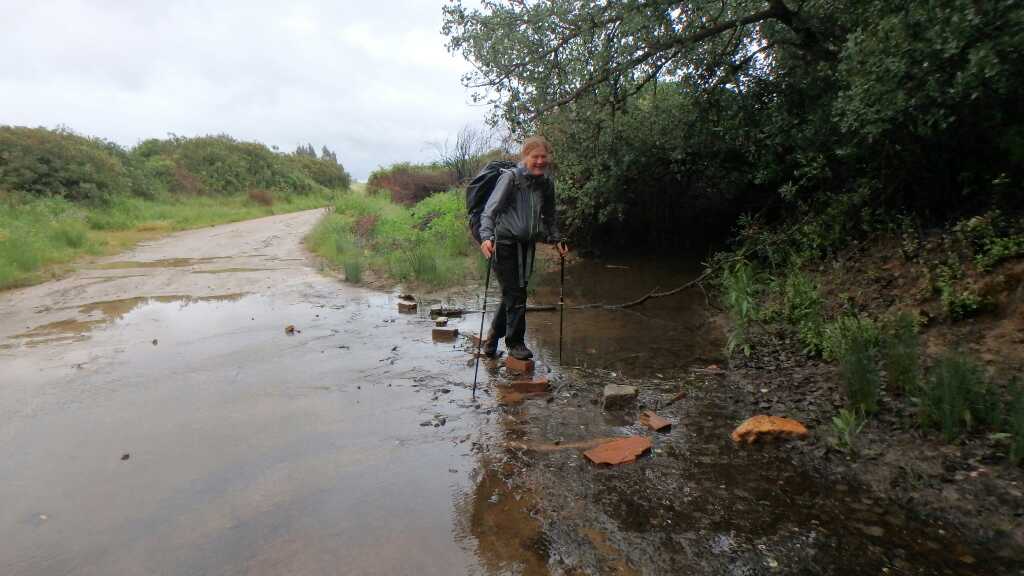 Hinjosa del Duque to Monterubio over 20 miles moderately up and down.
So leaving the ducks behind, but not unfortunately their weather we head off across the dehesa with no villages, no bars and maybe one place to eat what we bring and rest. We shared the albergue last night with the Italian (maybe older than us) who was full of doing 50 km yesterday but did the same as us, and today with once again poor weather forecast he is not so bold and is probably heading to Monterubios like us. Conversation is difficult even for Betsy as a polyglot of French Spanish and Italian results between us and him.
We are starting by 7.40 and it starts to rain just after, allowing enough time for clothing optimism and the rapid donning of water proofs. Tim whose water proof socks and over trousers worked well yesterday is in sandals, normal socks and shorts cold feet result but his fun in puddles compensates. It is a miserable day made worse by reports of 25degree heat at home. The large heaps of boulders in fields continue but soon fields give way to Holm oak pasture and occasionally fields of crops and cereals. Gradually the landscape becomes one of dehesa but with large areas of wheat with the usual Holm Oak in the fields. This is particularly pretty as the corn is just turning from green to gold.
After a brief stop between rain storms for oranges while being dripped on by an oak tree we next pause at an Ermita, old but done up in the 19th century by a Vicomtesse in memory of her husband. This has a porticoed cloister which we eat in until the rain stops. Only about 8km along the road to town now.
The sky looks black. We reach the border of Estradura and shortly after the skies open. A fitting start to our walking in the province named for climatic extremes. Strictly we are in the province of Badajoz in the Autonomous Comunity of Estramadura. Either way the next hour is cold and wet. The rain stopping just as we enter town. All have had enough and a meal and rest in the Hostal Vaticano at pilgrim rates is very welcome.