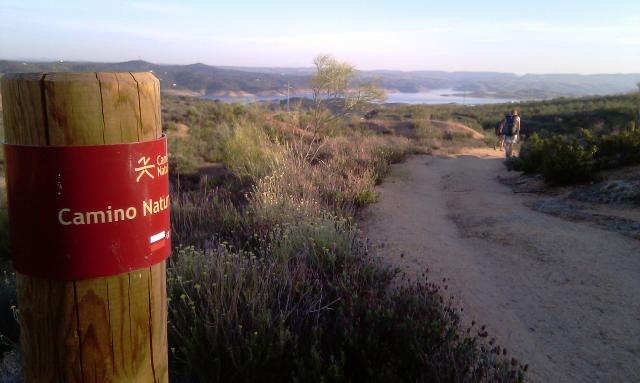 13.5 Domingo. Sunday. Casar de Caseres to Canaveral.
Todays walk is 34-36km in the information we have, different opinions abound (including 40km from three amiable young drunks thinking about going home at 5am) so a very early start is indicated. We are outside town walking on headtorches by 5.30. The route along the drove route rises slowly through an area of granite upland with good pasture and large boulders or cows just over the drystone walls on either side. In our torch light the difference seems to be the presence of large green eyes. First light appears behind what is probably a service area on the distant autoroute (blue lights surrounded by white) but may be an alien spaceship. The light becomes slowly better and without torches we see foxgloves, just blooming, growing in the cracks and gaps in the large tors of rock on either side of us. By 7.30 the sun has just become an orange glowing above our eastern horizon.
It was a hot quiet day in Casar yesterday, we and most of the alburgue were in bed by 9 expecting an early start, noise outside gradually increases, sleep at an early hour in town in a spanish town on Saturday night is difficult but this sounds like a riot. Then the band starts, not guitars and hard rock but a brass marching band with drums. Looking out from the first floor balcony windows of the dormitory in the imposing old pile in the main square that is the alburgue there is a sea of people many in full dress and then the bride arrives! A group of young men climb the balcony go open our front door and usher her up, all drunk but very aimiable. Tony is looking out of the window and somehow ends up on the balcony in his night shorts with the bride, the crowd roars with approval flashguns pop, he is rapidly replaced by the groom.
Photo call finished the band strikes up and a procession gradually fades into the distance, a little late we manage to fall asleep in the heat.
Back on today the day warms up and we reach the Embalse de Alcantara crossing two bridges with our old friend the N630 who appeared from out field. We pick up the GR113 just before the first bridge, one of Spain collection of secular footpaths and follow it over rocky pasture with several stops, at one near a cattle grid, Tony spots the biggest lizard any of us have seen in europe, about 15″ nose to tail.
Betsy is now fading fast from the heat and the water fountain at the entrance to the village, UP the hill from the little16th century bridge nearly proves too much. After that a short stagger through the village to the Hostal Malagar (air con) and our room for the night. After food (rabbit stew) and a siesta and copious water we all feel better, the next day is a bit shorter.
33km nearly 8 hours.