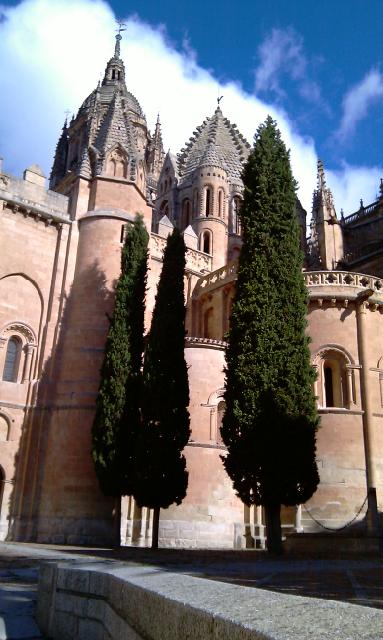 20.5 Sunday. San Pedro de Rozados to Salamanca.
We are walking by 5.30 the route to Morille (the next village) is fine in the dark and we race along, mainly because it is cold, after 10km Tim unpacks his rucksac to get at the gloves at the bottom. The ground is fertile, wheat still green and rapeseed in flower, unlike the UK cornflowers and poppies abound at field edges. A noise in the wood edge is a dog whinning, another large hound, black and white it comes straight to be fussed with and stays with us past a farm and to the next one. Soon we can see Salamanca in the distance, but then descend a little and follow the route from the village of Miranda de Assan up on to the hill overlooking a substantial swathe of countryside from where Wellington directed his troops at the Battle of Salamanca (or Arapilles as the spanish call it). There is a small damaged notice board giving details (very largely in English, the Spanish seem ever reluctant to acknowledge the British part in their War of Independence against Napolean).
From there we follow the usual yellow arrows into town and the fine bridge over the Rio Tormes into the shadow of the huge double cathedral of Salamanca. It seems best to think of it a a double as the two buildings are joined but the first was started in the 14thC and the second in the 17thC work continueing on both for centuries! The rooster tower with its huge dome is particularly fine, as is the small spaceman in the restored stonework around the main entrance!
It seems a lively town even on Sunday and with far to much for us to see in the rest of the day even though our rucsacks are outside the albergue at 1030 awaiting opening at 1200 but registration at 4pm.
After registration some of us visit the Art Noveau museum a short distance away there is some nice glass, bronzes and furniture but we are unable to appreciate most of it. It is still cold and thundery around town so we do little else but sit in the alburgue and wonder how early we will be allowed to start our 35+km tomorrow.