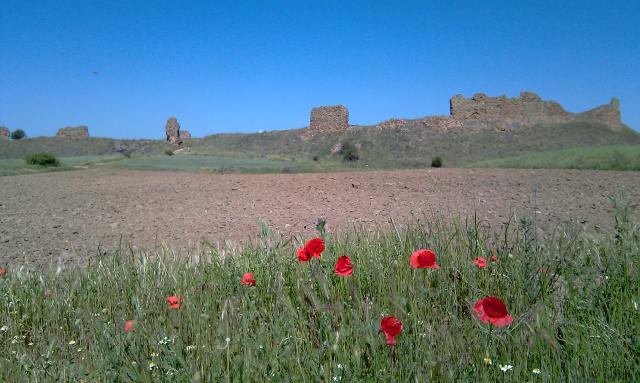 23.5 Wednesday. Zamora to Granja de Moreruela.
Yesterday evening in Zamora we visited the partially restored castle overlooking the river. The ex home of the Knights of Santiago it is of some historical importance but it is difficult to evisage its prior state as it had several intermediate stages over its 800 year history.
We talk to our hospitalero about leaving early, he is distraught that we may miss breakfast (included in our donativo) but says it is put out the night before and ready any time. The kitchen is well away from the dormitories and the door to the street open, no problem. The best laid plans, the door to the small drying courtyard is locked and our boots within. We only wait 10mins before he (an early riser) is up, so we pick our way out of Zamora breakfasted and coffeed by 5.45hrs.
We are soon out of town on dirt roads parallel to the N630, we can hear it more than we can see it, and once again for a long way we undulate across a sea of corn. It is very different to arable land in the UK, no hedges and very few trees but still raptors circling above and larks, cuckoos and partridges in the fields. It gradually lightens, the sky is blue and cloudless, it will be hot later.
We get coffee in Montamarta with its inevitable church of storks just before a stretch of the multi armed Embalase de Ricobayo another of Francos reservoirs, the level is low and has been for sometime, we walk across to the Ermita on the other shore. Shortly after we get a first view of the ruins of a very large castle at Castrotorafe. After some twists and turns we get to the castle deserted and slightly menacing in the heat, overhead circles an eagle, we think later a short toed eagle. After another few km we enter the village of Riegeo del Camino where we plan to stop, and are greeted with a loud explosion, this is repeated at frequent intervals and the Guarda Civil drive past. We duck into a bar from the door of which has appeared a previously seen spanish pelegrino, he explains the village is having a party and the albergue if not actually closed is being ignored. He stayed in a free new albergue outside Zamora, great albergue, new bunks, no mattresses! We have a beer and a think. Eventually Betsy decides we will move on 6km, no pressure was applied! We move out into increasing heat and soon spot a large snake moving off. Then a vole, large and plump, scuttles along a dry ditch, watched closely he finds a hole and squeezes in with a struggle, probably not his hole but needs must. Whether it is us or the heat he wants to avoid must remain moot!
After another hour and a half we get to Granja and another albergue and bar combination here we stay and collapse gratefully with another beer, meal, shower, washing, sleep in order of priority. It is 8pm before the temperature starts to drop.
41km 8.30hrs