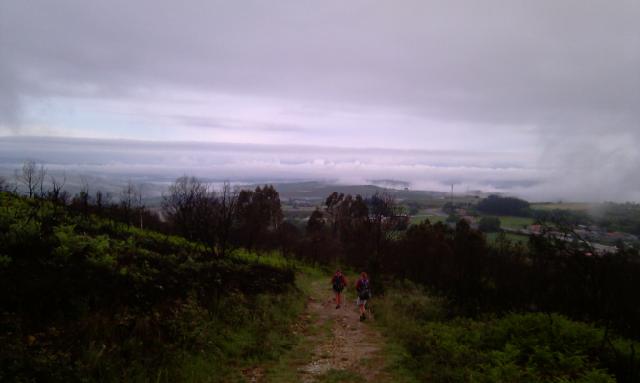 3.6 Sunday. Cea to A Laxe.
We discovered yesterday that Cea is famous for bread, and has several old communal ovens in town. Apparently the name is still franchised across Spain. The bread in question is hard crusted, chewy with very large gas holes. It is hard work and very filling. This morning we start at 5.15 and the route soon heads up 400m into Galician mists to a height of nearly 900m. As we descend light shows clouds left from yesterday’s rain lying in the folds of the land we are crossing.
We walk through a mix of farmland, heath and thin forest, efforts at reforestation being foiled by patches of burnt young woodland and heath.
Birdlife is typical british the hoopoe has not been heard in Gallicia much less seen though cuckoos are still cooking in the woods and valleys. We also spot, a nuthatch in one of the mature oak woodlands through which our path passes and a deceased Robin at the side of the road.
We are not yet finished with Pan de Cea, eventually on a Sunday in a sparsely populated land we find a bar/cafe open and subside gratefully into it awaiting coffee and toast, the traditional spanish snack, a tray of inch thick toasted Pan de Cea appears with butter (a pack), a box of Philadelphia cream cheese and a jar of peach jam. There is more than enough to keep us going as the morning switchbacks up and down across the approaches to Santiago, only two more days now.
33km 8hrs. (probably more than 700m ascent)