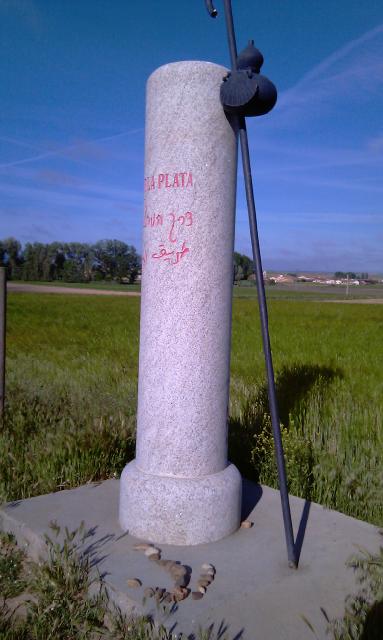 22.5 Tuesday. Cubo de la tierra de vino to Zamora.
We are out and off by 5.20, Senor Philippe leaves the keys in the back door for early starters, no big city lockins here.
There is a large yellow arrow just outside to get you started in tbe right direction, and an honesty box inside for wine and beer, all together a fine alburgue.
Dawn happens as we crest a ridge, excellent views over the plains northwards, and we can just see the various Sierras that we pass below later. As the sun rises a mist occurs concealing all beyond 100m, but only for a short time. We have coffee in the Bar Via de la Plata in Villanueva de Campean open by 8 possibly sooner, approaching which a series of modern milarios with steel pilgrim gear beside them as way marks start ( we are now in the region of Zamora in Castil y Leon).
Shortly after Tony spots a 3ft snake that disappears into the wheatfield. A sign outside the village commends the area’s wildlife and while we miss out on the wild boar the birdlife is prolific. We see kestrels and possibly perigrine falcons a male Hen Harrier, many goldfinches, partridges and later a Great Grey Shrike. We herd a Hoopoe up the track ahead of us for 200m. Later another snake even bigger than the first slides away at our approach.
Quite soon we crest another low ridge and see below us Zamora about an hour and a half away. As we enter there are some good views of the old town and bridge across the river Duero which having formed the Almeda reservoir crosses the border with Portugal and becomes the Douro reaching the sea at the port shippers of Oporto.
The albergue currently (may2012) opens. at 1330hrs and we have time for a beer in the main square before checking in.
32km 6.30hrs