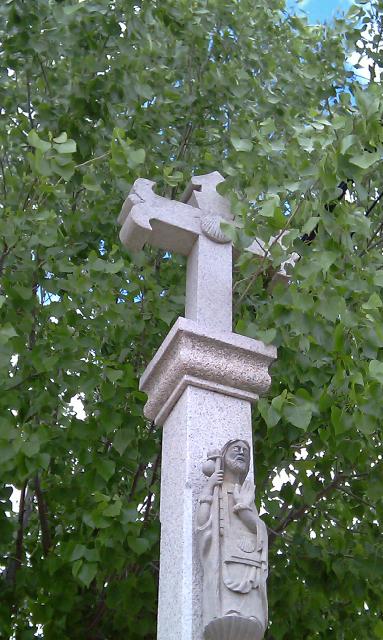 21.5 Monday. Salamanca to Cubo de la tierra del vino.
Today is a big day, fortunately the weather is cool and no rain is forecast, the terrain is flat ish. So all that is required is an early start! Our now friends Mimi (the amazing French lady who lives some of the year in Alicante) and Jose (the retired Spanish footballer who played for Madrid in the 60s) also need to start early (both of them normally would do) but have a train to catch to Madrid (and maybe further?). Our hospitalero (in charge of the albergue) has other ideas, he normally unlocks the front door at 7am. The traditional peregrino early morning exit (the fire escape) leads only to a very nice locked garden bounded by the 30m high city walls. Very secure against attack by Moorish forces, but not ideal for an early start! Jose has words! And wins a half hour concession, he is spitting fur and feathers in a torrent of spanish, we explain the concept of a Little Hitler, he agrees. We all are unimpressed by our hospitalero, but we are walking through the main square to go our separate ways by 6.30. We follow the road out of town and northwards it is GR 100 camino N630 and motorway combined but the arrows mostly guide on camino de la tierras out of sight of the autoroute.
The name of the village we are heading for translates as the edge of the land of wine, we sincerely hope not, but it is well recognised that northwards spread the plains of Castille, the bread basket of Spain and a land of corn rather than vine that we walked through the north of on the Camino Francais 4 years ago. During the day we see a few cows even fewer sheep and goats and one patch of oak pasture. The landscape has changed from the Constablesque tree shaded pasture to the green seas of corn with occasional tractor ships and lighthouse grain silos. No hounds join us and we tread these seas alone.
We arrive a bit cold and windblown are welcomed by Senor Felipe a dedicated hospitalero and after a shower and washing done, dispatched down the road with a phone call to Casa Carmen, Carmen the plump elderly lady of the house welcomes us to the parlour with an open fire where she has just served lunch to her husband, we join him for a lentil/pasta stew followed by Pollo y Fritas and salad washed down with red wine with flan for pudding. We feel much warmer immediately, and discover this is from the live embers in the dish on the floor under the table. Even the senor agrees that this may be a fire risk but it seems well worth it to us at present.
A good siesta and the world is much better and a walk around the village reveals an old church(locked) and a newish santiago cross outside. The albergue is a member of the association of villages supporting the camino and pilgrims bring economic support into
the village, but even so its population is shrinking.