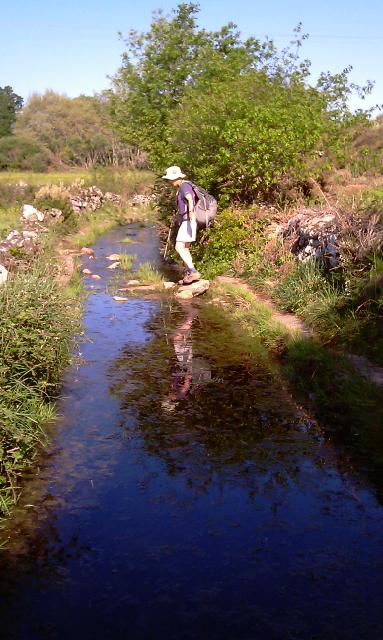 31.5 Thursday. Lava to Villar de Barrio.
We have some choices about distances to walk over the next few days, there are some stiff climbs before Ourense and distances are awkward. We opt for the shorter distances and the extra days travel. One donkey is dozey.
So with only 20ish km to do we start late, about 6.30 after a disturbed night and none of us at our best. After a 4km amble up the valley from Laza during which we see a field of brilliant yellow lupins (wild or tame? impossible to tell), we start to ascend from the misty verdant fields up a steep slope into yellow gorse, heather and later young pine plantions. Views as the mist rises are fine and frequently admired (nothing to do with rests)!
We see two turtle doves and a rock bunting, eventually reaching Albergueria at about 900m from 450m in Lava on the valley bottom. This hamlet, now very depopulated once had a pilgrim hospital for those sick or injured on the Way. Now for a few years it has a private albergue and cafe at which it is customary to write one’s names, date and start on a scallop shell and it gets nailed to the ceiling. There is a fair amount of space left but filling rapidly!
Shortly after another stream takes over the path, Betsy nearly comes to grief on a large wobbly stepping stone. Tim, an admirer of Santo Domingo (the civil engineer of the medieval Camino Francais) stops to improve the way for some future pilgrims by wedging it more solidly. Probably not a work as durable as some of Domingo’s.
Another km or two and the route passes an old wooden cross and starts finally to descend to Villar de Barrios. The day is warming up by the time we reach it, passing several Horreos on the outskirts. It is two years since we have seen these characteristic Gallician grain stores, and currently they are a new and exciting landmark, they are so common later as to be boring, but for now Betsy gains points for spotting the first.
20km 5hrs