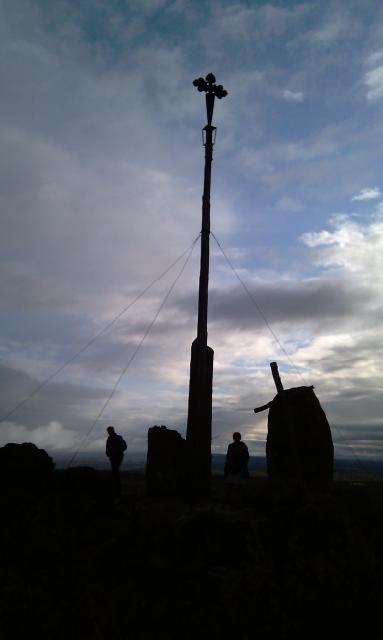 19.5 Saturday. Father Blass at Fuenterroble de Savatierra to San Pedro de Rozados.
After our lunch, in the nearest restaurant in which Jose (our professional footballer) turns art critic over an abstract painting and confuses the owner (possibly artist) by seeing people in it, we sleep in our cave in Father Blass’s ever extending albergue. He finishes the concrete and turns to laying a wooden floor. We sleep again, it is a restful place, after a bit more food eaten out the back next to the shed with the carts for parading the saints effigies, and then start walking at 5.30am.
There is a change in weather forecast, a cold front may bring rain by 5am.
It is however not raining when we start but very dark, cloud no moon, no dogs creep up behind us, and we find our way to the roman road across the fields without difficulty. Rain threatens and in torchlight we eat a hurried breakfast while donning waterproofs.
The day continues cold with intermittent drizzle and we climb from a base of 900m in classic cow country (like England or France) to a peak (small hill) at 1170m, this to some extent explains the temperature and the change in flora. There is a brief halt when Betsy claims to see a large bird in a tree and refuses to believe that it is “only stuff”. The dispute is only resolved when the “stuff” takes flight in the shape of a vulture! Other interesting bird moments include actual sightings of some of the secretive but noisy cuckoos and a flock of 13 storks which fly in front of us. We see deciduous oak and ash instead of cork and olive trees at the side of the road, and, on the slopes of La Duena, the highest altitude (it is a hill not a peak) on the Via de la Plata camino, two different species of orchid in prolific clumps. Also a surprisingly english looking bluebell wood. On the route up Father Blass and his helpers have been busy for a few years erecting crosses to celebrate Easter, Betsy says there should be 13 (or was it 12) stations. We only see a few of them before the grey wet encloses us and the world shrinks to the wet grit beneath our feet bordered by a nylon hood. Happily we reach San Pedro (fortunately no gates) about half an hour later, and a Casa Rurale at which we gratefully stay.
Over our afternoon nap the skies change from grey to blue with large white clouds and the world is a brighter place.
28km 6hrs Tomorrow Salamanca.