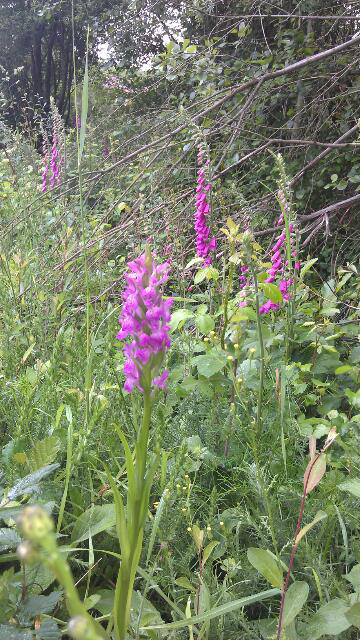 Another relaxed start with only 24km to do today and, better still, another good breakfast since the bar helpfully opened at 06:30. On the outskirts of Sigueiro we were slightly puzzled by a roundabout which as well as having a sculpture in the middle was fully carpeted in 3 or 4 colours. Que?
After a very brief walk through the industrial estate the rest of the day was almost perfect Galicia – dry, mostly sunny but not too hot, and with tracks across attractive countryside and through eucalyptus plantations. Some of the tracks seemed very ancient, sunken as much as 10 feet below the surrounding land.
We met a total of 13 peregrinos going in the opposite direction and, near one village, quite a few locals out for walks. A large proportion of these kind people were very quick to ask us if we realized that Santiago was NOT the way we were going; one elderly chap who was walking his dog then stopped for a longer
chat, telling us how he had worked in Reading from 1965 – 1969.
3 hoopoes flew past and for the first time in the entire journey we saw 2 peacocks in a garden. (Their distinctive call has been heard frequently).
Many beautiful wildflowers again too, including some very tall purple orchids trying to camouflage themselves amongst foxgloves.
As usual the route passed a selection of stone crosses and also a quite large Santiago statue which was accompanied by a dinosaur, a collection of ancient tractors and some other random statues – a somewhat surreal collection! Even stranger was the statue on the outside of a church which appeared to be having its throat cut.
Our arrival timing at the albergue was perfect, the hospitalero appeared within seconds. He was very insistent on showing us the entry in his book for Tim from 2 nights ago and was friendly and helpful, willing to provide a manta for the peregrina without a sleeping bag, and efficient at taking an order for a takeaway to be delivered at 8 (we hope).
Currently looks like being a very quiet night, we have one other fellow pilgrim in residence, unless of course you include the great-tit who spent siesta trying to break in through the dormitorio window.