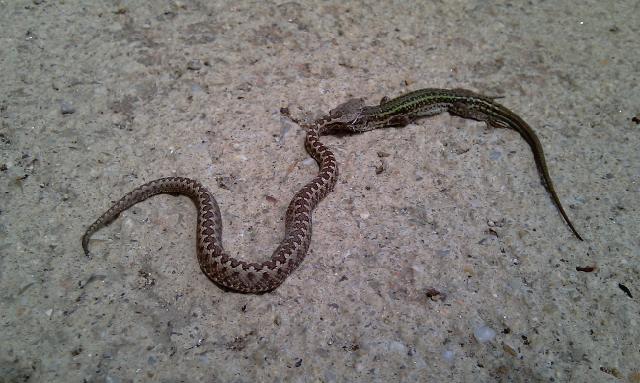 28.5 Monday. Puebla de Sanabria to Lubian.
Today is up, the highest point on the route, for those following our journey who think we reached that 2 weeks or so back, that was the high point on the Via de la Plata (strictly the route from Seville to Astorga). We are now on the Camino Mozarabes Sanabres since the split of the routes in Granja de Moruela.
The commercial albergue last night was good and well organised we slept well and started later at 6.30. A conscious effort to feed Betsy over the first part of the day and the forceful redistrubution of some of her pack meant that we all reached the top of the stiff climb up to Porto de Padornelo (1350m) without collapse.
The walk from Sanabria in the morning follows the road and later the autoroute as the valley of the Tera narrows but largely staying off tarmac. At first on the flood plains through white broom heavy with dew with maybe some frost in places. It does not seem as cold as yesterday but we are an hour later and more warmly clothed.
We get coffee in Requejo after about 15km, there was a machine in the albergue but this was its only bad point only one cup was bought, and abandoned! After this the way steepens rising through deciduous oak woods with ferns, bluebells, forgetmenots and a solitary primrose, very English or French Pyrrenean. We are definitely now into Atlantic flora instead of the Mediterranean forest, changed by man into the dehesa (the name for the Holm and Cork oak pastureland), which we were passing through for much of the Via de la Plata. The fauna reflect this also, we see more deer and this is supposedly the only remaining area in western europe for wolves. No more storks and the usual corvids have replaced kites and harriers in the air.
Streams from higher peaks and springs from the water table abound, indeed in several places the streams take over the path needing small detours. Formalised springs are in most of the small villages as fountains or animal drinking troughs, some are repaired or replaced but many houses abandoned and derelict. Part of the urbanisation of the population in many parts of Europe with marginal agriculture. Most churches remain in good repair and one clings to its chain attached to the bell tower, presumably to sound for masses instead of the all to common electronic Westminster chimes!
We get beds in the municipal albergue, some of the last of the 16, four have already gone to people we strongly suspect of being taxigrinos, absence of packs and luggage with wheels being strong evidence. Others walking later from Pueblo de Sanabria are less fortunate, an early start may be indicated tomorrow, although there are more beds available in A Gudina. The rules for Municipal albergues are that assisted transport walkers should wait until walkers have checked in before being allowed beds. On our way to lunch we see a small snake on the road trying very hard to eat a lizard larger than itself, about eight inches long, although probably venomous (the lizard was dead), it posed no threat to us. Sadly it seemed to have been hit with a rock when we returned, but not before successfully swallowing its prey as pat of the lizard was protruding fom its side. Life in the Sanabrian mountains was hard.