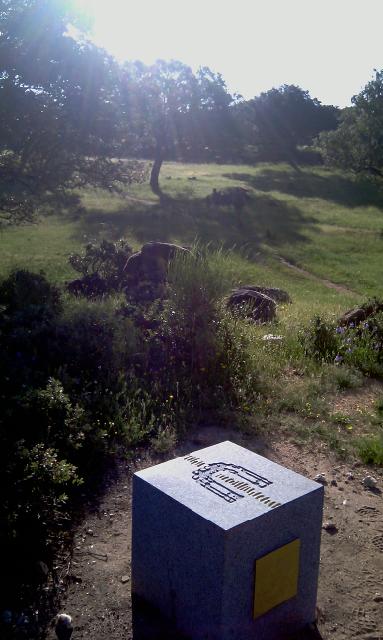 15.5 Tuesday. Galisteo to Oliva de Placencia.
From Galisteo along the Via de la Plata there are 49km, too long a day for us in this heat, we agree to break the distance in Oliva de Placencia, this is 10km off route but means a total increase in distance of only 6km over the two days.
The alternative is a night spent out in the delightful oak pastures we walk through over these two days, without showers or water (let alone a square meal), we are not that hard core!
The day planned is a sandwich with a suberb filling of oak shaded pastures (that seem more verdant than lower down) and granite boulders this tasty meal covered by a rather stale 10km of ashalt at each end.
We set off at 5am after breakfast in the albergue (supplied the night before) and today Betsy says the spell is different??

Yesterday there were two bats, a toad and an owl hooting before dawn, today four or more bats and a snake. Spotted by Tony as dead and dried up in the road, but very much alive and slithering into the grass when headtorches shone on it (about a foot long). What the purpose of the spells is Betsy does not divulge, maybe to ward off heat, we hope she gets it right, too many bats may mean rain!
After the first 10km in the dark on roads we reach Carcaboso by 7.30, a respectable 5+km per hour. There is an open hostal/cafe/restuarant on the main street only 100m from the route through town. Coffee!
We are soon off again and the route steepens in a steady climb up from 280m to 400+m, this plus the shade from the wonderful oak pasture we walk through along the old roman road that defines this section of the Via de la Plata allows us to remain cool and make good time through some of the best walking this trip. Cows and cuckoos are herd and seen on both sides of the way and Tony spots another snake in a large puddle of tadpoles it seeks the mud and plays dead when it is fished out for photographic purposes. It is returned to its muddy gastronomic heaven where we leave it.
The Way is well marked through this part the green and yellow flashes on the sides of the granite cubes indicating the route indicate footpaths only or cycle, 4×4 routes,(according to a sign we see), we earlier thought these were the Camino and the Via de la Plata or Via Pecuaria (drove road), these names are not mutually exclusive and considerable overlap exists on maps and on the ground.
All too soon we reach the road to Oliva de Placencia and our second bit of stale bread, its a bit heads down in the sun for 8Km but there are storks, kites and cuckoos to distract us from the tarmac, so sooner than we thought we reach the village and its small albergue touristico, to be welcomed by the hospitalero Monica who is a fund of information, and as first arrivals the three bed Dormitorio 1 is ours for the taking. She also cooks supper for those who wish, (not quite the only show in town as the Bar down the road also does tapas and menus) the village shop closes at 1300hrs we were in time to purchase tomorrows oranges. Tomorrow we should see the real object that decorates the tops of the granite cube signs, the remarkably preserved Roman arch back on route and only 6km away at Caparra. We are told by a Spanish walker the next two days are the best in Estramadura!