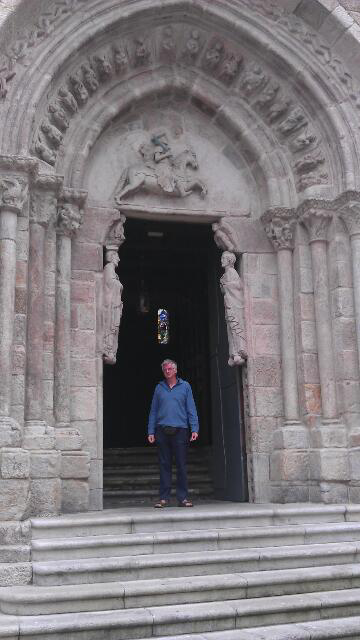 The takeaway ordered for us by the hospitalero last night arrived earlier than expected and was surprisingly good – a complete dinner kit in a crate. The head count in the albergue increased by 2 noisy cyclists who arrived at 9:30 just as the hospitalero was about to lock up.
A relatively early start in the morning (walking by 06:15) in a light drizzle; this persisted on and off for about half the day causing lots of indecision about waterproof clothing.
With an estimated 32k to do our approach to the day was a little more focused than yesterday’s bar crawl (oops, didn’t mention that before). The end really did seem to be in sight when, after only 8 km, we paused at a high point for what we believe was our first glimpse of the Torre de Hercules. Not that close though as there were another 6 hours of gentle (?!) hills, gentle rain, chicken farms, eucalyptus woods etc before we crept into A Coruna past a short stretch of industrial estate and then along the pleasantly flat riverside path before a final assault up and down an urban hill to arrive at the Iglesia de Santiagoy. (Photo at front of church, matamoros above, Tony below!).Final sello obtained from a slow but helpful priest – yee ha! We’ ve done it!
868 miles and 53 days walking.