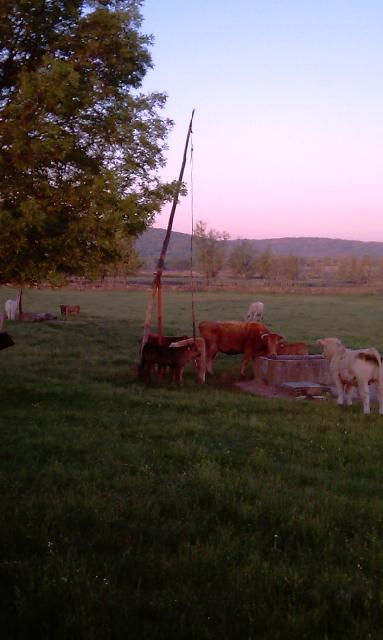 18.5 Friday. Calzada de Behar to Fuenterroble de Salvatierra.
Walking a camino can be a gradual getting to know people, one tends to see some of the same day by day as they move at the same speed, others are ships that pass in the night, noticed but unknown, last night we learnt the proper name of Mimi who covers the same ground as us at twenty years older with less apparent effort. She is Marie Antoinette! Jose who was a professional footballer playing for Real Madrid in 1966 was disappointed to learn of our lack of interest in the sport inspite of our nationality.
Not a big day and mostly over 900m so with cooler weather we stary later, taking full advantage of desayunos (breakfast) offered at the albergue (just as well no bars open en route till gone 10.00hrs).
We leave the hamlet with two storklets on the church bell tower at about 0700. It is light (tomorrow may be difficult, no moon) and we do not stop to visit the two donkeys behind the albergue, the walking is good in the cool temperatures and we move well on about 50:50tarmac and dirt road. Cuckoos and hoopoes are heard on all sides and a pair of Orioles cross in front of us.
A sign in the village about local paths and interests suggests that the local wells have an interesting type of device for raising water, the name translates as “baby stork”, they are more like the nodding donkey oil pumps of texas history, either name would seem appropriate.
We pass a tepee constructed by a visiting ladies basket ball team!? For the use of pilgrims. And soon arrive in Fuenterroble at the albergue of Father Blass who is laying concrete. His fame as a sort of latter day Santo Domingo (14th century builder of bridges and roads on Camino Francais) is well known and his albergue is capable of holding up to 90 pilgrims, a coach is just leaving. There is a three room part for American pilgrims which may in part explain the teepee, and the basket ball court on the left on entering the village. Whatever, the albergue is donativo and very well cared for with a load of bits and pieces from the camino stashed arround and a room with a couple of dozen old spanish saddles.
The albergue is liberally decorated with mostly camino related murals and Father Blass’s energy appears to stretch to a complete refurbishment of the parish church (with reconstructed roman road beside it) and multiple statues of St James.
20km 4.15hrs.