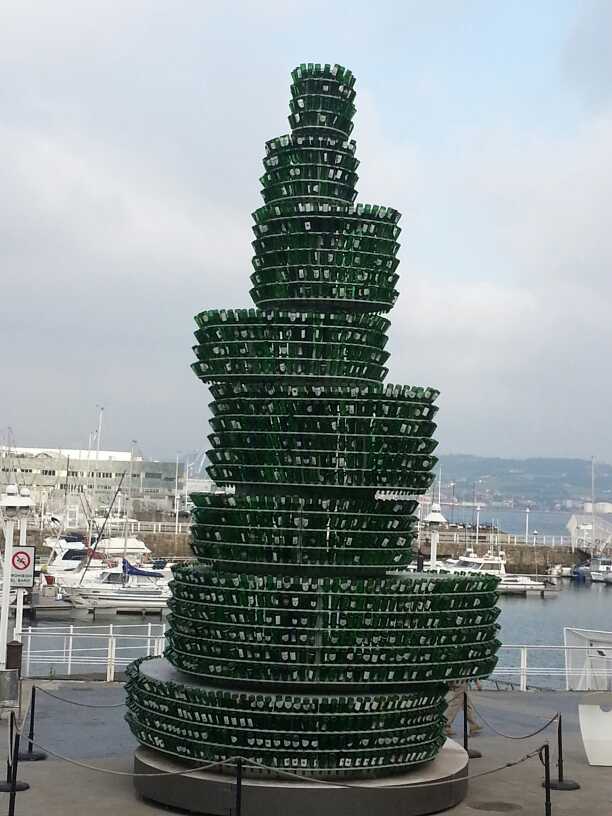 4.07.14 Friday Deva to Aviles through Xixon.
We knew this was a not good day but the night before with what was a chalet of young spaniards having a party just 20 m away did not help. Limited sleep excess distance through built up industrial areas you get the picture. We were impressed by the number of old folks homes in Xixon/Gijon various names including Casa Geriatrica, Hojar Ancianos and one for people of the third age. By the time we go to ground in Aviles we feel we should have stopped in one of them.
In between we have seen what Xixon has to offer. On the way in a very odd stone carving in a recess and a defunct cidrr making plant. A large glass sculpture of cider bottles, and the buried Roman forum opened by Octavian in the first century. Now reburied so not visible. Followed by the steel works and motorway on the way out of town. The next delight is a section of nondescript countryside in which we may have seen a dolmen. Followed by a bar and another 10 km of industrial heartland culminating in Dantes inferno and a plume of fire and smoke from a petrochemical works fortunately the haze from this did not reach the right side of the tracks. However reaching the right side was a problem for Geof who in a bit of s daze got hooted at by the train possibly as a warning possibly just as a friendly pilgrim gesture.
We collapse into the second bar we come to unable to resist temptation any longer and then through the nicer old centre of Aviles. Fortunately we find an open tourist office just before we exit the town and they book us into a pension only 2 streets away recognising we have walked far enough and some team members are on their last legs.
34 km maybe 600m of up and down