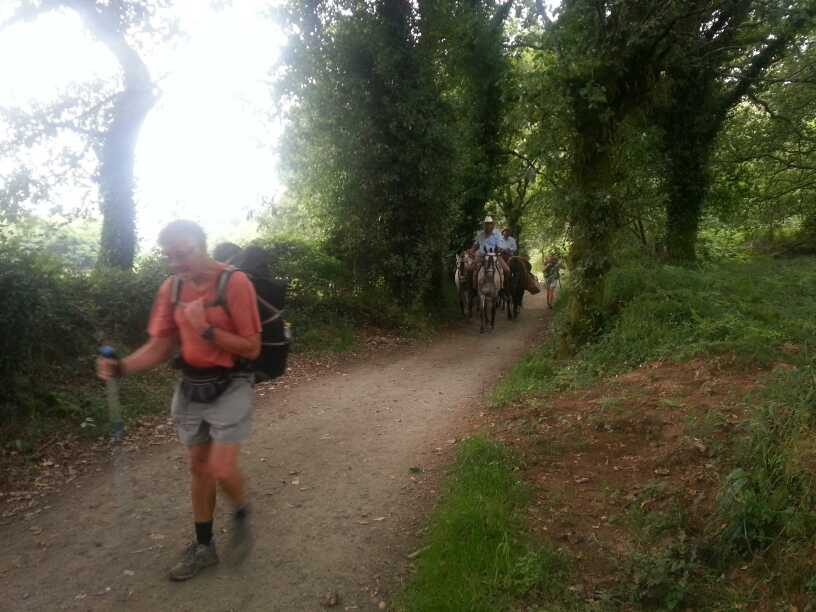 A quiet night and reasonable sleep in the Milky Way see s us up and breakfast in a cafe in town and off across the Gallician countryside. We are no longer alone or with the few we have met and are used to. We have the hordes from the Camino Francais some from long distance such as the fellow English chap who started in Narbonne, others who have done less and some with limited time starting fron St Jean pied de Porte andissing bits with buses etc. All this means that bars are plentiful and we can forsake our rule of never passing an open bar. The route is extremely well marked and the waymarks defaced with most of the distance markers removed. Many graffiti artists as well as the lover of John Lennon’s songs who has been adding words to the way since we entered Gallicia have added their usually banal comments on many flat surfaces.
We have agreed to split the 40 km walking left over two days fairly equally but on arrival before 1200 in O Pedruzo the helpful man at the tourist office convinces us that another 10km is not far and there is a very nice Casa Rural. So we have lunch. The waitress in the cafe recognisers Betsy and Tony from last year when they did the camino with Jane from O Cebriero. It is surprising Tony says they are not recognised in all of them as frequent pauses were the order of the day on that trip.
We cross the end of the airport and non too soon arrive at this very nice quiet hotel. We have come far enough today but only about 10km remain.
32km maybe as much as 800m up and down the rolling Gallician countryside