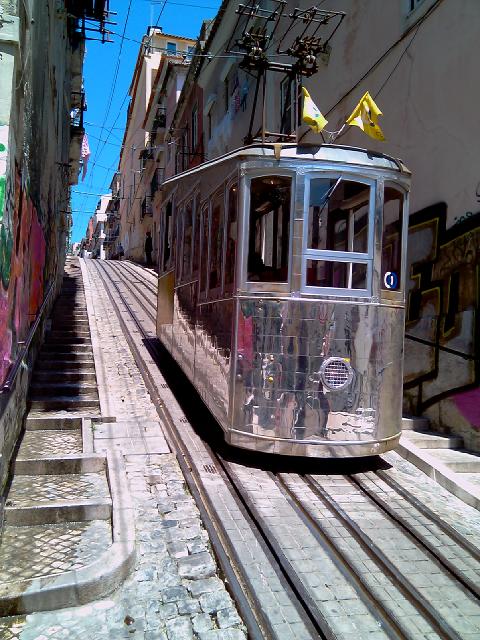 May 5th Wednesday.
Better night must be getting used to our travels even if we haven’t started yet. Once more on to the trusty 714 bus and into town. We climb up many flights of steps though tiny passages. It would be easy to climb the wrong hill but having circled the castle we arrive back at the castle gate and stop for the worst cup of coffee ever sold us. The castle dates to the 13th century originally Moorish but recent excavations show remains of an Iron age fort. The views are impressive and Lisbon is a memory of orange roofs and white stone walls. The old castle walls are well maintained and laced with olive and pine trees.
We now fulfill 2 remaining projects riding both the street trams that race up and down the steep cobbled streets, and a funicular down an even steeper cobbled descent.
After lunch of some tapas in a little bar just off the funicular, we head for the tile museum. We spotted this on the first stage of the walk 2 days ago and it seemed interesting given some of the buildings around the town are covered with them. We found it quite easily in spite of the help of a friendly portugese who directed us off the bus 2 stops early. This did allow us to witness the alternate use of cobble stones, known to revolutionaries thoughout the ages, throwing them! We think he was a drunk denied access to the station not a real revolutionary.
The tile museum was worth a visit in an old convent building containing not only religious tiled friezes but also secular wall coverings from the 16th century onwards.
After which a walk back to the bus and back to the campsite to prepare for Jane’s departure home and the start of the real walk tomorrow.
Finally the team would like it known that none of the previous posts have been proof read and any errors of fact, logic, spelling, grammar or syntax are Tim’s fault alone.
Jane would like to you to know that she has now corrected the typos in previous posts (so much easier from the computer at home) and will continue to keep an eye on the posts. The style, however is Tim’s alone!

One thought on “May 5th Wednesday.”