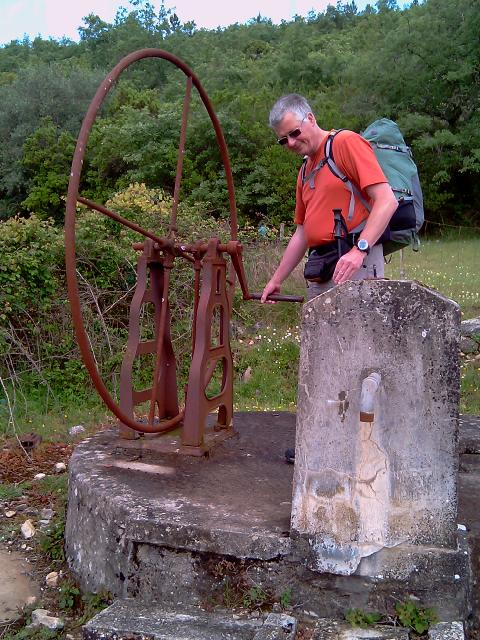 May 13 Thursday.
Then there were two and they set off along very similar paths to yesterday. Olives and cork oaks, some harvested 3-4 years ago. They put dates on them and the trunk forms a smooth black scab and the typical rough cork bulges through in time producing a new skin ready to stuff into more bottles of wine. Seems much more right than plastic closures. Especially since the vines are so close at hand. That there is water close underground is obvious from the many irrigation devices attached to wells some of which we can see water only a few metres down. Most are now unused as are some houses and land in this beautiful area. We find a pump with a 2m high wheel attached but despite our best endeavors we cannot coax any water out.
Eventually after passing though a lot of limestone walled paths with the now familiar orchids, wild roses and multiple other wild flowers we start to approach Rabacal and meet two other pilgrims on bicycles, one is English the other Polish, she is collecting and pressing wild flowers. We find a bar opposite the church in Raba??al and send a text to Betsy, who replies she is in the museum waiting for the lady with the keys to the rooms for the night. After 5mins another text arrives “I can see your rucksacks” she waves through a window of the museum next to the church. Team successfully reunited, and tales of the morning exchanged. Betsy failed to get internet access – after 2 attempts to visit the library a helpful passer-by explained that today was a village holiday in honour of Papa’s visit to fatima so the publicised opening times did not apply. OK, next challenge finding a taxi, assuming that one would turn up eventually at the taxi rank in the square. Wrong again! After half an hour faced up to requesting advice from 3 elderly gentlemen sitting on one of the benches. After a long conversation in french one took pity and phoned his taxi driving friend (who was of course at home, also enjoying a day off for papa). Alfredo appeared in 5 mins and provided a slightly hair-raising trip to Rabacal, regaling his passenger with tales of his time in Paris. The final fun was when after arrival and payment he tried to drive off with a rucksack still in the car boot!