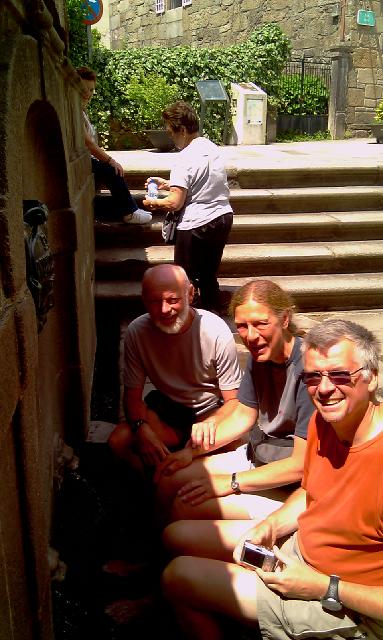 May 28th Friday.
We set off early again, it’s becoming a habit, it might be warm. In fact it is a perfect day for walking cool and bit misty until the sun gets up, but staying cool until we arrive on the edge of Caldas de Reis. On the way after retracing our steps of last night to the Sanctuario de Pelegrina in the middle of Pontevedra in the dark we follow the little blue lights in the steet stones through the maze of small streets to the edge of town where the yellow arrows take over, (we do like a town that thinks about its pilgrims).
The route follows our friend the Via Romana XIX, past ever increasing numbers of fountains and crosses, along bits of very degraded roman road and through fields and vineyards. This is a prosperous looking area there are very few derelict places and many are obviously in process of repair and most cultivatable areas are well tended, especially the vineyards in process of being sprayed against disease. We benefit from this diligence later with a very good local wine from nearby Orouense at lunchtime. Also we note a new agricultural practice, that of tethering one sheep of a small group to keep all the group in one place without fences.
During the walk we make a short 500m detour to a local beauty spot just off the N 550, a series of water mills on waterfalls. The area was used for the purpose for centuries and kept clean by the man from the local council who comes round to clean up and empty the bins. At this spot in the valley of the Rio Barosa an attack on Marshal Soult, Napoleon’s general in spain took place killing 30 of his bodyguard. This place was recommended by a spaniard who we keep meeting around various towns and albergues and is a great stop to visit on the Way.
By 1230 we arrive in Caldas de Reis over the bridge on the N 550 which claims to be a bit roman (but isn’t) and gives rise to a minor dispute as to where the albergue is (it is over the next bridge a classic old roman construction refurbished in the 17thC). On the way, down a few steps on the left in front of the hotel on the main square is a public foot bath of hot thermal sulphurous spring water. It is as hot as can be borne and is a tonic to tired pilgrim feet. We visit it after lunch and inveigle several other pilgrims into its soothing waters.
This is a very nice little town, possibly the best on the Camino Portuguesa. We have lunch with the friendly spainiard who speaks no english, Betsy is hard pressed for conversation but strikes out gamely, he manages to get over the concept of “taxigrinos” those peligrinos who use local taxis to transport their luggage or themselves up the Camino. This is a remarkable linguistic feat and we applauded him.