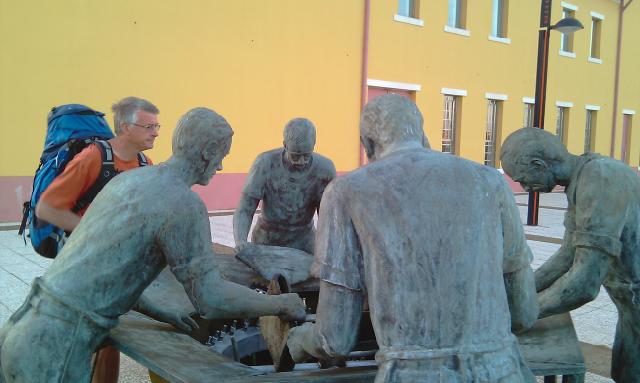 May 19th Wednesday.
An even earlier start than yesterday, out and walking by 0620. We pass the hat factory (now a museum) on the outskirts of St Joao da Madeira after 10 minutes. There is an interesting group statue around the back.
Pressing on, the day unfolds with a mix of minor roads with tarmac and minor roads with cobbles and roman laid stone paving, in some places the 1700 year old road is in the better condition. Wandering along we talk with a spanish pilgrim on his way to Santiago and spot an elderly lady doing her washing at the lavadeira.
When at about 1100 we reach Grijo, about 18km short of Porto, we consider our options – to push on in the increasing heat and maybe push Betsy’s recovering shin too far, or to look for accommodation just off route. We choose the latter, the whole distance into Oporto would be 37km and we have two days in hand. We can just see the sea in the heat haze and the washing line outside in the garden of the residencial is an added attraction for rapid complete drying of our washing.