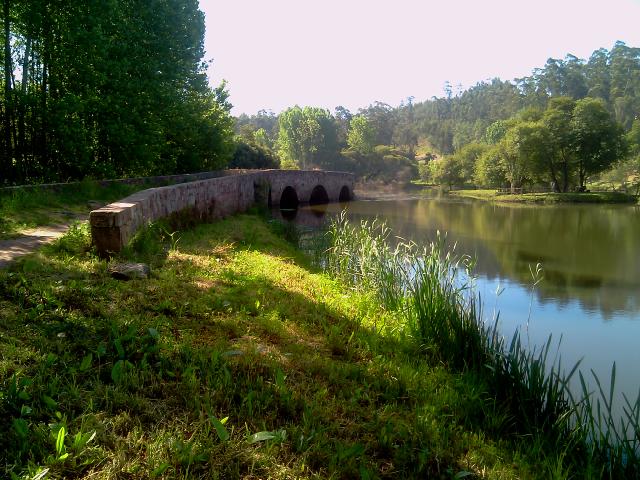 Monday 17th May.
A quiet night at the Bombeiros, no other pilgrims or bombeiros disturb our rest on the dormitory at the back of their 200 seat auditorium we set off fairly early after a coffee in the cafe opposite, the house at the end of the bridge appears quiet as we pass, observations yesterday tending to confirm its status in the guide.
We expect a short day today 19km. Betsy thanks to a short day yesterday has an improved shin. But at the first coffee stop Tony swaps packs and loads Betsy’s huge pack with some of his own stuff. Thus lightened she seems to cope better.
The route is mainly tarmac country roads and pleasant walking with a well restored medieval (or roman?) bridge over a small river almost under the modern roadbridge. However at one point we travel along tracks through a eucalyptus forest in which (although we successfully negotiated the two in which our guide came to grief) we have difficulty finding yellow arrows. We think we were led astray by a broken one, and then broke the cardinal rule, (when on a deteriorating track without signs turn round). After finding the motorway and seeing a bridge 250m away we then had about 200m of undergrowth and a stream to cross. This seemed preferable to two barbed wire fences , two crash barriers, a metre high concrete central reservation and two streams of high speed traffic. We get across and after about 4km we enter Albergaria a Velha, our destination. The route takes us over an old railway line and up the side of the town so we are almost out of town before realising we have missed the main square and our lodgings. We retrace our steps and with the help of two locals and Betsy’s excellent portuguese we find it. It has a restaurant next door in a wine cellar – we have lunch, surrounded by barrels of wine, and washed down with very good vinho da casa, it is half price! We don”t ask why maybe because we are staying next door maybe because we are pilgrims.
After a siesta (the weather is hotter now) we wander round and visit the local library to take advantage of free internet access on something easier to use than the phones. Betsy deletes many emails and discovers that the deaths of the bombeiros in Agueda in 1986 were due to a high wind during a forest fire trapping them on a track.