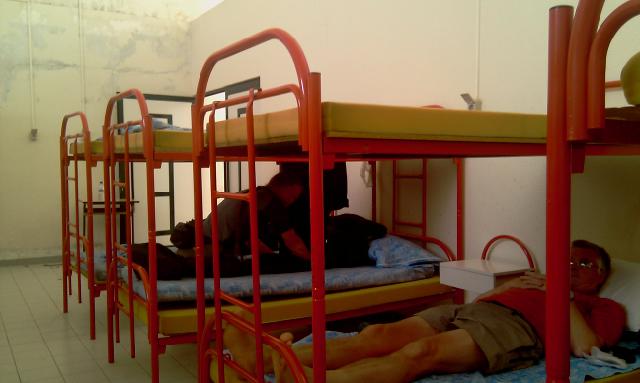 Sunday 26th May.
We set off together from the piglet centre of the universe, we ate some last night it was worth it but not a cheap stop.
We wander at first down country lanes through small villages with houses that are better tended and few derelict. In some villages the churches not only had a fine black cockerel as a weather vane but the same nauseatingly repetitive chime through loud speakers replacing the traditional bells that ring the hours. But in other places there is an obvious air of decay and decline.
Alas after 12km the shins of Betsy (no not the sins) became bad enough that she agrees to find alternative transport. There being no donkey or sedan chair available she settles for a taxi driver summoned from his Sunday rest by the lady in the bar in which we stopped for coffee.
The two remaining continued down similar paths to days past with increasing evidence that we are on The Way, scallop shells and road names including Santiago. This has really been less evident before and the route as befits the way to the major portuguese pilgrimage of Fatima has been mainly in the reverse direction, now St James is in the ascendancy and instead of fellow pilgrims trying to turn us round we are wished well by locals who know where we are heading.
Shortly after starting this morning we met a serious spanish pilgrim en route for Fatima, he had walked Santiago from (we think) his home town of Toledo on one excursion and from Rome to Lourdes on another with (we think) a few more walks in between, all in aid of multiple sclerosis.
The walking is pleasant enough untill we hit the 5km long industrial estate outside our destination of Agueda, this is quiet, it being Domingo (sunday) but boring. (Plenty of cheap lunchtime meals on a workday) After 5km of this we enter the suburbs and see an open cafe, we are early we think, time for a swift half, we have barely sat down when the texts roll in. Betsy has found the intended residencial for the night, it is full, so she is dispatched with the son of the house to The Bombeiros to negociate for a bed!
As always, nothing is simple – the Presidente has to be summoned from his sunday meeting to approve us and prefers to try and donate us to the local Red Cross. When he finds that they have no space he finally accepts the inevitable and despatches one of his minions to provide a guided tour of his fire station which turns out to include a large dormitory with bunks for 28 people and some excellent hot showers. We await with interest the possible arrival of 25 other peregrinos or maybe some burly bombeiros!
The station is modern and equipped with ambulances and big red fire engines along with more sober photos and roll of honour of nine bombeiros dying in the line of duty in a big fire in 1986. The Bombeiros Volontarios is very reminiscent of the RNLI – a very professional voluntary organisation in a physically demanding and high tech situation. We are grateful for the bed, the only other suggestion in the guide is the “bordello” at the end of the bridge!

One thought on “Mealhada to Agueda”