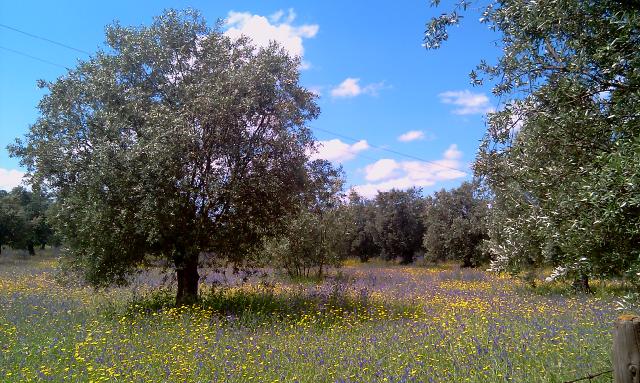 9th May Sunday.
Santarem that we stayed in last night is a walled town on a hill overlooking the Tagus. Obviously a town of importance and a medieval seat of local government. It was the home of Pedro Alvares Cabral the discoverer of Brasil for Portugal, this providing later a refuge from Napoleon for the Portugese monarchy.
Early in the morning we hear the rain and are fully rigged for the wet on leaving our comfortable lodgings. It is not raining but starts hosing down within a minute or two. By the time we reach the park of the gates of the sun with views of our route to the north it has stopped so we seize the opportunity to have breakfast before starting our perilous descent down a wet overgrown path beneath the town walls. There are yellow arrows so at least one idiot has passed this way before. The route goes then over vineyards and fields along some muddy tracks with more rain falling. The weather gradually clears and eventually we reach Azinhaga having startled a few storks who were fishing or whatever storks do, by some ponds we passed. During the day we are overflown by many storks, we saw hardly any in flight in august two years ago, only in their nests. By the time we reach Azinhaga a village not far from Golega (the equestrian capital of portugal) we are very muddy but none the less welcomed in by the owner of a restaurant off the main street. It was not obvious except for a sign saying open (but not what was open) we peeped in and were retreating again when he appeared and dragged us inside for some excellent roast duck. Other birds spotted during the day include a red kite, a purple heron and just opposite the restaurant a whole row of swallow residences full of young with parents busy feeding them.
The final 5km passed quickly and painlessly except for Tony getting caught up in Betsy’s walking pole, and passing a grove of olive trees with purple and yellow flowers littering the ground around the old trees. On arrival at the campsite in Golega we find chalets available at 96 euros per night, the bombeiros are looking attractive but we find a large room with 5 beds above a cafe that seems used to pilgrims at 15euros each, we then get talked into another meal with promises of pork in red wine with more to go with it. The portugese do like their food.