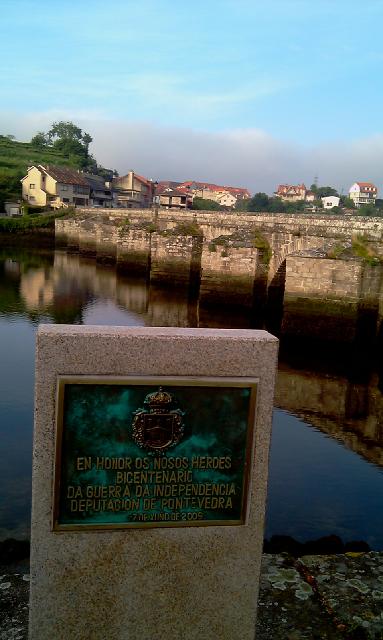 May 27 Thursday.
Only four easy days remain till Santiago, so we rise late and are off just before 0700. It is misty, a typical Galician morning – cool and moist, no rain, perfect walking. We wend our way out of town yesterday’s washing decorating our packs. The albergue in Redondela while a nice old stone building is tight on space and drying clothes is impossible.
The walk includes two short but steep ascents and after the first descent there is the remains of a roman bridge that finally fell in the stream a few years ago, there are obvious plans for a replacement modern footbridge but currently a short diversion by the road is recommended (there are some home made stepping stones but a paddle in dry weather is also possible). Slightly later in Arcade there is a long narrow road bridge Pont Sampaio over which a battle was fought by Spanish army and Galicia irregular forces against Marshal Ney during the Peninsular War (Or war of independence as the spanish call it) against Napoleon. Two hundred year celebrations were recently held, (no mention of Wellington and the British of course).
Up another hill and down again where there is a welcome stop in some enterprising lady’s garden for coffee, we meet an anglo irish group who walk together on an annual basis and were impressed by our trip from Lisbon and even more by the Camino from England in 2008.
We are now well into Camino memorabilia with statues and crosses (both ancient and modern) at what seems like every step of the route.
We arrive in Pontevedra to find the albergue is open at 1pm despite being advertised as opening at 5pm. Result!
After lunch and a siesta, down into town to view the church sanctuario da perigrinaga which had a floor plan of a scallop shell. This is a pleasant town with modern shops and a nice old part of squares and bars, and lots more crosses and scallop shells.
Finally we drop into a bar for some Zamburinas (scallop in garlic) before the walk back the albergue. Another day on the Camino completed.